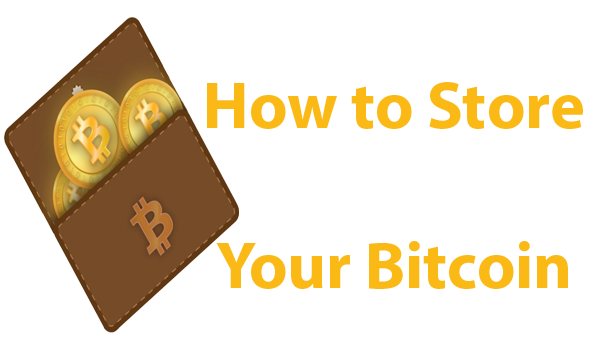 How to Store Your Bitcoin

Before owning any bitcoin, you need somewhere to store them. That place is called a “wallet.” Rather than actually holding your bitcoin, it holds the private key that allows you to access your bitcoin address (which is also your public key). If the wallet software is well designed, it will look as if your bitcoins are actually there, which makes using bitcoin more convenient and intuitive.

Wallets can either live on your computer and/or mobile device, on a physical storage gadget, or even on a piece of paper. Here we’ll briefly look at the different types.

Electronic wallets can be downloaded software, or hosted in the cloud. The former is simply a formatted file that lives on your computer or device, that facilitates transactions. Hosted (cloud-based) wallets tend to have a more user-friendly interface, but you will be trusting a third party with your private keys.

Installing a wallet directly on your computer gives you the security that you control your keys. Most have relatively easy configuration, and are free. The disadvantage is that they do require more maintenance in the form of backups. If your computer gets stolen or corrupted and your private keys are not also stored elsewhere, you lose your bitcoin.

They also require greater security precautions. If your computer is hacked and the thief gets a hold of your wallet or your private keys, he also gets hold of your bitcoin.

Online (or cloud-based) wallets offer increased convenience – you can generally access your bitcoin from any device if you have the right passwords. All are easy to set up, come with desktop and mobile apps which make it easy to spend and receive bitcoin, and most are free.

The disadvantage is the lower security. With your private keys stored in the cloud, you have to trust the host’s security measures, and that it won’t disappear with your money, or close down and deny you access.

Perhaps the simplest of all the wallets, these are pieces of paper on which the private and public keys of a bitcoin address are printed. Ideal for the long-term storage of bitcoin (away from fire and water, obviously), or for the giving of bitcoin as a gift, these wallets are more secure in that they’re not connected to a network. They are, however, easier to lose.

With services such as WalletGenerator and BitcoinPaperWallet, you can easily create a new address and print the wallet on your printer. Fold, seal and you’re set. Send some bitcoin to that address, and then store it safely or give it away.

Hardware wallets are small devices that occasionally connect to the web to enact bitcoin transactions. They are extremely secure, as they are generally offline and therefore not hackable. They can be stolen or lost, however, along with the bitcoins that belong to the stored private keys

That depends on the version and format you have chosen, and how you use them.

The safest option is a hardware wallet which you keep offline, in a secure place. That way there is no risk that your account can be hacked, your keys stolen and your bitcoin whisked away. But, if you lose the wallet, your bitcoin are gone, unless you have created a clone and/or kept reliable backups of the keys.

The least secure option is an online wallet, since the keys are held by a third party. It also happens to be the easiest to set up and use, presenting you with an all-too-familiar choice: convenience vs safety.